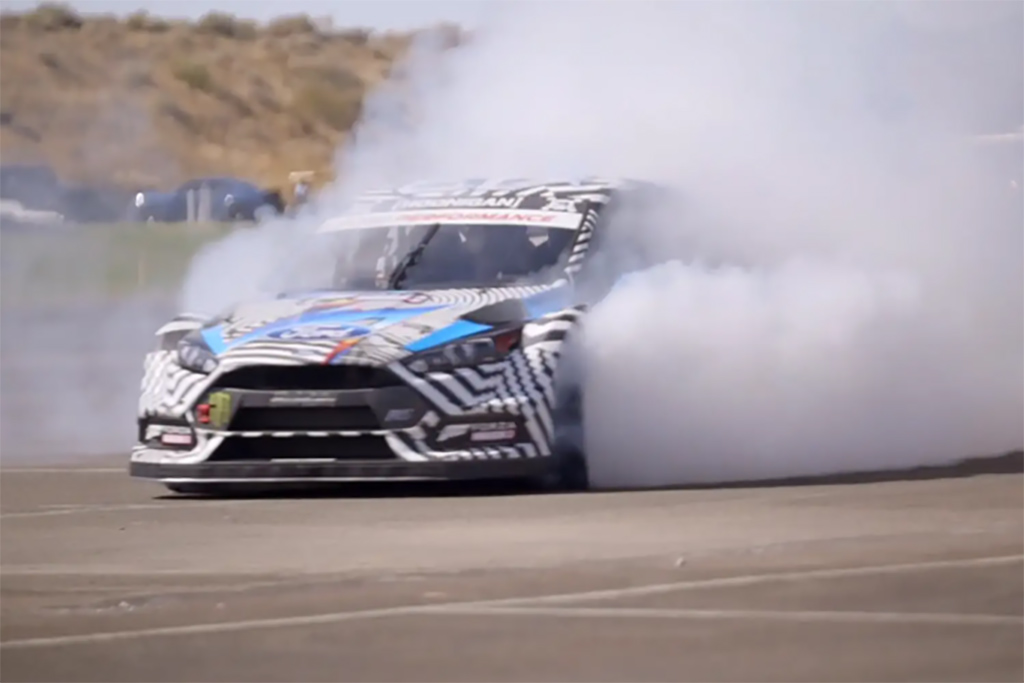 Selling vehicles for worthy causes has long been a staple of The World’s Greatest Collector Car Auctions, generating excitement and emotion in the auction arena like no other vehicles could, particularly as every penny of each sale goes directly to the charities (Barrett-Jackson waives all fees on these special offerings).

Barrett-Jackson was honored to have three charity vehicles lined up for the special 2020 Fall Auction at WestWorld in Scottsdale, all benefiting organizations with military and veteran connections. 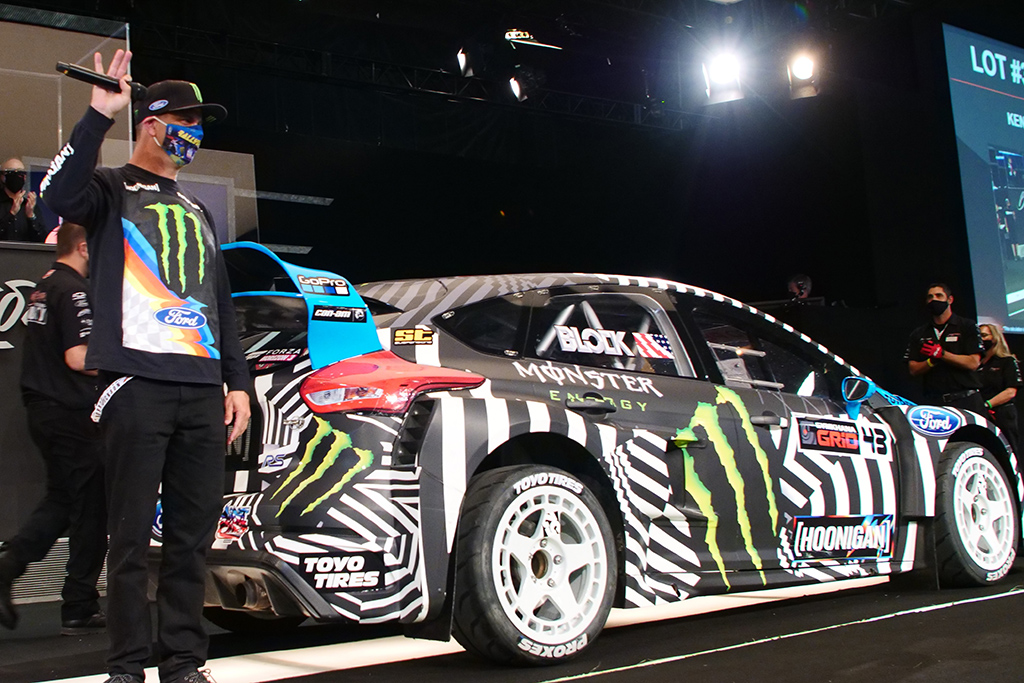 Rallycross champ Ken Block came to the stage for the sale of his 2016 Ford Focus RS RX.

The first offering, a 2016 Ford Focus RS RX FIA World Rallycross car, was a real star – an internet sensation with more than 45 million views on You Tube as rally driver Ken Block’s co-star in “Gymkhana NINE: Raw Industrial Playground.” After taking Barrett-Jackson CEO Craig Jackson for one last donut-filled spin in the car, Block himself brought it to the stage to raise funds for Team Rubicon, which serves communities by mobilizing veterans to continue their service, leveraging their skills and experience to help people prepare, respond and recover from disasters and humanitarian crises. After Block and Team Rubicon President and COO Art DelaCruz said a few words, bidding was off and running – escalating quickly until the hammer fell on a final sale price of $200,000 to a phone bidder from Australia.

The “Ultimate Tailgate Truck” came complete with an integrated 65-inch TV, game table and audio speakers, and an articulating Yeti cooler and a grill.

On the second day of the Fall Auction, an incredible vehicle known as the “Ultimate Tailgate Truck” announced its unmistakable presence on the block with a blast from its train horn. The custom 2019 Ford F-350 Lariat pickup had been built by Truck Hero and is kitted out with, among other things, a remote-controlled, articulating 65-inch TV, an integrated inlaid wood game table and remote-controlled audio speakers, an articulating Yeti cooler and a grill, to top off the perfect tailgating weekend. 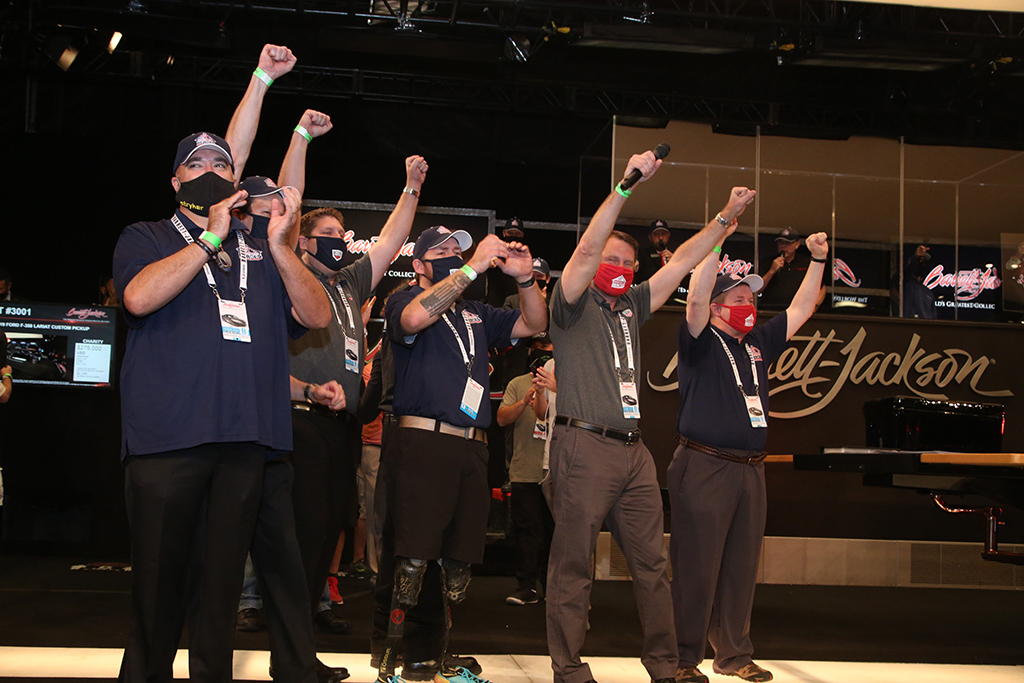 Truck Hero and Building Homes for Heroes representatives couldn’t contain their excitement when the “Ultimate Tailgate Truck” sold for $275,000.

The entire sale price of this truck was earmarked to benefit Building Homes for Heroes, which has been gifting mortgage-free homes that meet the needs of wounded American service members from the Afghanistan and Iraq conflicts and their families since 2006. With two Building Homes for Heroes recipients – Army Sergeant Benjamin Decker from Arizona and Army Specialist Scotty West from Arkansas – on the block to cheer on the bidding, the bids came in fast and furious before one lucky individual went home with what is sure to be the envy of his neighborhood, for the winning bid of $275,000. 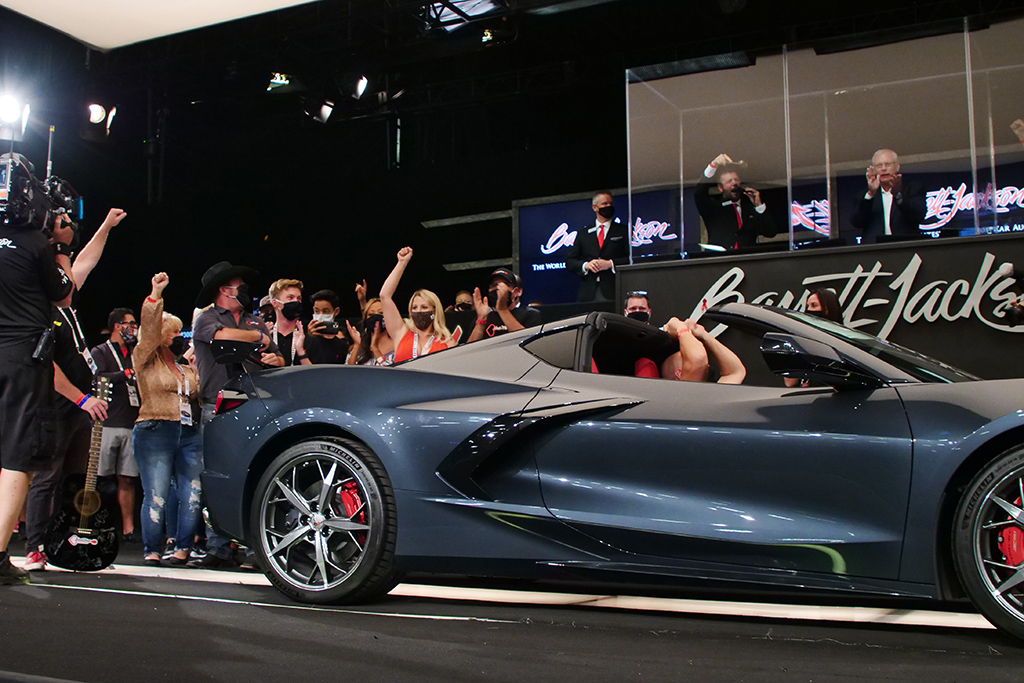 Cheers erupted on the block as a 2020 Chevrolet Corvette sold for $370,000 to benefit the HeartStrings Foundation.

Super Saturday at the 2020 Fall Auction saw the third and final charity car take the stage: a striking 2020 Chevrolet Corvettegenerously donated by a longtime Barrett-Jackson customer to be sold for the HeartStrings Foundation, which provides guitars for music therapy programs all across the country, with a focus on military, first responders and children’s hospitals. As if the beautiful Stingray – with just 32 miles on the odometer – wasn’t enticement enough, the offering included a guitar signed by a number of notable country music artists, and HeartStrings offered to donate 50 guitars to a cause of the winning bidder’s choice. 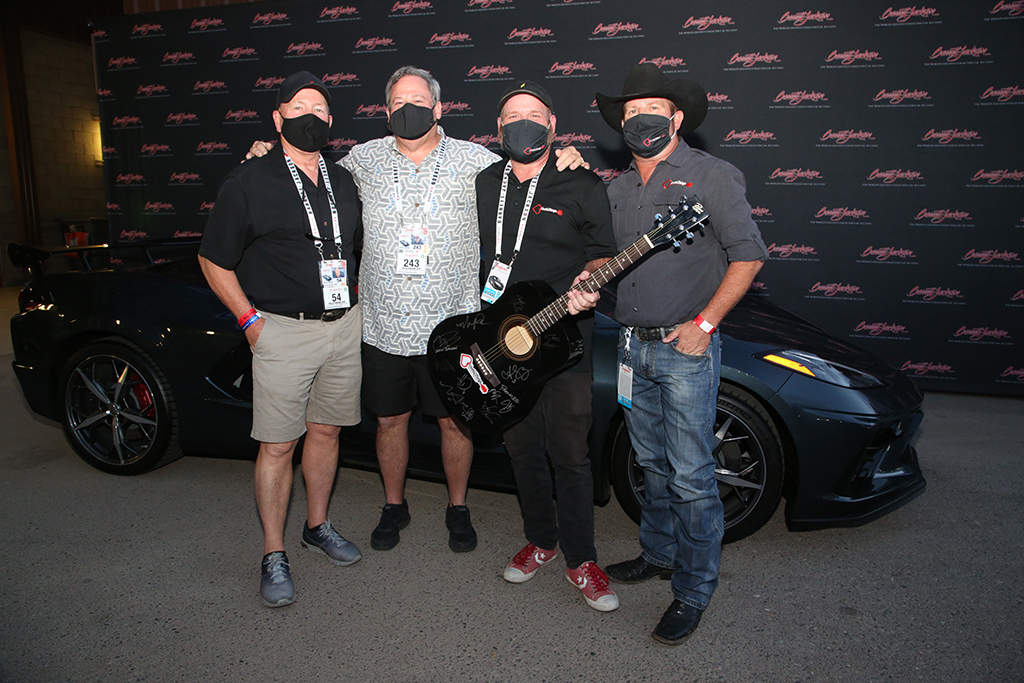 The generous donor of the Corvette and the lucky winning bidder celebrated with Aaron and Rowan Pickering of the HeartStrings Foundation after the sale.

It didn’t take long for the bidding to reach the $300,000 level, but after an impassioned interjection from Barrett-Jackson President Steve Davis (“The American spirit is absolutely unstoppable, and each and every one of you shows exactly why that’s the case!”), the numbers continued to go up and onward, with the gavel coming down on the final winning bid of $370,000, resulting in tears of joy and much jubilation from the HeartStrings Foundation representatives on the block, which included founders Aaron and Rowan Pickering.

Thanks to the generosity and giving hearts of our consignors and bidders, a combined $845,000 was raised through the sale of these three important vehicles at the 2020 Fall Auction – bringing the total raised for charity to date through the platform provided by Barrett-Jackson to over $127 million.

Shopping for someone else but not sure what to give them? Give them the gift of choice with a Barrett-Jackson gift card.

Free US Domestic Shipping on all orders over $99 or more. Excludes specific products & promotional items.

Get The Latest Event Catalog

Getting ready for an upcoming Barrett-Jackson Auction or Looking for some memorabilia from a previous Auction. Our Catalogs are a click away!